The volume of submissions shows the concerns of the community regarding this particular development.

As previously reported, to date Nambucca Council has not received a Development Application (DA) from Ingenia Lifestyle.

Robert Hunt, Acting General Manager, Nambucca Valley Council said, “Council will be undertaking extensive community consultation as part of the development assessment process once a DA has been submitted.

“There will be plenty of time for public meetings etc once a DA is received, we won’t be rushing this through given the community opposition.”

Mr Hunt indicated that Council and Councillors will not be making any public comment until a DA has been received.

“Council needs to be properly informed to make a decision, and if Council makes public comments, expressing their views before a DA is received it could preclude a councillor or Council from the decision-making process.”

Mr Hunt stated that Ingenia will have to pay DA and other contribution fees.

As a manufactured home estate, the Ingenia development will not have to pay development contributions on the value of the houses.

“Ingenia will have to make development contributions to the Council.”

“Ingenia will be having the houses manufactured off-site and placed there later, they will not have to pay a development contribution on the value of the houses,” said Robert Hunt.

As with other manufactured home estates in NSW, Ingenia will pay rates on the value of the whole site, not individual homes.

This is considerably less than if the Council rated each house individually.

“This makes more affordable housing, however, they are using all the available infrastructure that ratepayers have paid for or contributed too, so it seems unfair that these estates do not pay rates.”

Council has advised that any submissions received relating to the Ingenia development prior to DA lodgement will not be taken into consideration.

Council is requesting that residents wait until a DA is received, then make a submission to Council during the advertised public consultation period.

Ingenia is holding a Community Information Day on Saturday 19 February at Macksville/Scotts Head Surf Club from 10:00 am to 3:00 pm.

Covid protocols will be in place.

Concerned residents can liaise with Ingenia about their concerns at https://ingenialifestyle.com.au/scotts-head-community 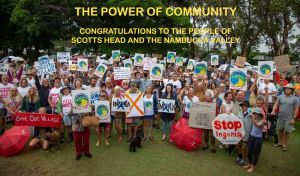 On 20 October 2022 Ingenia announced the withdrawal of its proposal for an over-55s development at Scotts Head.

END_OF_DOCUMENT_TOKEN_TO_BE_REPLACED

THE PUBLIC EXHIBITION PERIOD FOR INGENIA’S DEVELOPMENT APPLICATION CLOSED ON 31 AUGUST 2022. A TOTAL OF 574 SUBMISSIONS WERE LODGED WITH NAMBUCCA VALLEY COUNCIL, WHICH IS AN AMAZING EFFORT FROM THE COMMUNITY!

END_OF_DOCUMENT_TOKEN_TO_BE_REPLACED

The SHCG submission was lodged with Council on Monday 29 August 2022. It was prepared with the assistance of dedicated community volunteers and professional experts in the areas of planning, ecology, transport, hydrology and bushfire risk.

END_OF_DOCUMENT_TOKEN_TO_BE_REPLACED

What can we do?

LEARN MORE ABOUT THE INGENIA PROPOSAL

Learn more about Ingenia and their proposal for Scotts Head.

FIND OUT HOW YOU CAN GET INVOLVED

See how you can help with making sure the Scotts Head community has a strong voice.

VOLUNTEER AND GET IN TOUCH WITH US

Feel free to send us on email and let us know what you think about this proposal and any suggestions you may have.

READ THE LATEST UPDATES AND NEWS

Get all the latest media coverage and latest news about the Save Scotts Head initiative.